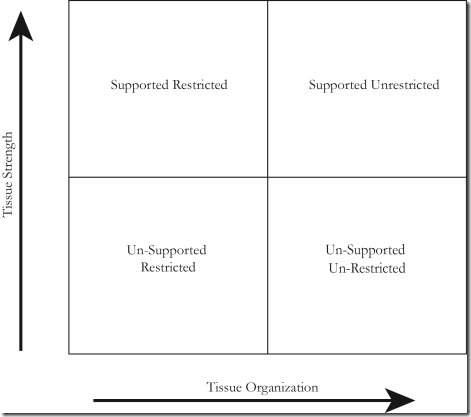 The human body is a wonderful organism which is able to adapt to structural challenges. In fact, structural challenge is required for the body to be at its maximum potential. If we don’t load and stress bone it will lose strength and mass, this is the same for tendons, ligaments and the nervous system. Challenges to the body’s structure are characterized by a broad spectrum of force/velocity, from low force/velocity; slouching at the computer, to high force/velocity; a car accident.

A body’s ability to adapt to structural challenges is a measure of its ability to survive.

Hans Selye developed what he called the General Adaptation Syndrome (G.A.S), in 1932. (He was the first to use the term stress.) In the general adaptation syndrome, Selye explained that the body has three stages of coping to stressors:

· The alarm reaction which prepares it for fight or flight. No organism can sustain this excited state for long so it passes into the second stage,

· Resistance where a resistance/adaptation to the stress is created.

· If the stressor is long lasting the third stage, Exhaustion or breakdown, is entered.

I use an analogy of a checking account to talk with my clients about adaptive capacity. Each of us is born with a genetic ability to adapt (the checking account) and as we move through life we write checks against this account. When we fall while learning to walk, or ride a bike and playing sports we make withdrawals. We can put funds into the account through, exercising, doing things like Yoga, Pilates… When we run out of funds in the adaptive capacity account the check bounces. This can result in an injury or a cascade of aches and pains. It’s easy for us to see the big “checks” we write but we also write checks against the adaptive capacity account that are much smaller which cumulatively spend the account down, providing us with aches and pains.

Rolfing returns adaptive capacity to a body through the removal of fascial restrictions, an increase in suppleness, and range of motion. It trickles more funds in the adaptive capacity account. But at the same time, our clients are writing small checks against it. Have you ever wondered how a one plus hour Rolfing session can possibly overcome the hours of poor postural patterns our clients spend outside of our practice? (Of course we can offer them functional movement education to use during the week, but I question the client’s compliance with this.)

Why Work is important.

While Dr. Rolf recognized that gravity was a constant in the life of humans, there was another constant that we can only recognize now by its absence: work. During the time of Dr. Rolf’s life people worked more than they do today. The work I’m talking about isn’t the process of creating something, it’s the physical act of applying a force across a distance, (work = force x distance). The force here is the weight of the human body. More people are moving from occupations that require physical effort—moving their bodies—to ones that require sitting, often in front of a computer.

The adaptation to this new work paradigm is a body pattern that is energetically efficient for sitting for hours looking at a screen. Since millions of people around the world have adapted to sitting in front of computers with the same postural pattern I can only surmise that it must be an energetically efficient one, in response to the dominant stimulus/stressor to their body (G.A.S). (Another interesting adaptation is the need for eye glasses in young children.)

I spent years leading engineering teams in the ergonomic design of work spaces, yet we still adapt to sitting in front of the computer with the same postural patterns, even with the expensive chairs and lumbar and foot supports, swivel computer screens… Creating more comfortable work spaces is not the biological impact we need to stop the adaptation.

What’s missing? It’s not simply work that’s missing. People go to the gym, yoga, and Pilates studios and do work. What’s missing is work with a biological imperative to change that is a strong enough stressor to counter the hours of sitting. Interestingly I have found that CrossFit does this with some very simple techniques.

CrossFit is a fitness system that has its base the idea that, constantly varying functional movements done at high intensity, creates the greatest adaptation in its athletes. The exercise selection for the CrossFit workouts comes from three disciplines: gymnastics, cardio (termed monostructural or metcon in CrossFit) and weight lifting (both Olympic and Power Lifting). CrossFit uses ten criteria to measure fitness: cardiovascular/respiratory endurance, stamina, strength, speed, flexibility, power, coordination, agility, balance, and accuracy. The results: the lean body of a gymnast with the strength and speed of an Olympic weightlifter.

The CrossFit prescription of constant variation is in direct response to a body’s need to be able to adapt to the unknown and unknowable stimulus that life presents. (CrossFit workouts are rarely repeated in the same year unless it’s for comparison, and since they are constantly changing they do not allow for the negative aspects of the second stage of G.A.S to occur.)

The functional movements used are those that move from the core to the extremities, require the use of multiple joints, precise neuro-muscular control and use the entire fascial system. Isolation exercises like bicep curls or lat pull downs are not found in CrossFit since they do not meet the requirement of functional movements. The high intensity is scaled to each individual’s capability and provides a strong enough stimulus to exact a bodily adaptation while avoiding the third stage of breakdown. The group nature of a CrossFit class, as well as the recording of the result of the workout, combines to provide another stimulus comparison. Whether with ourselves from a previous workout or with our classmates, this creates the desire to work harder the next time.

Can CrossFit help our clients?

The first evidence I had that a CrossFit like exercise routine may be beneficial to my Rolfing clients came in May 2009. It was then that I noticed that my teenage son’s posture was changing for the better. He was stronger, more supple and able to easily stay on his line. He had been doing CrossFit for almost a year by then and started a CrossFit club at his high school.

I started doing CrossFit under my son’s coaching and when he went away to college I joined a CrossFit gym. In December of 2009 my wife made a comment to me that she could see a big difference in me. Since I was doing CrossFit, my “posture” was better! (Not something a Rolfer wants to be told is the effect of something other than Rolfing.)

Three months after my wife started CrossFit I noticed that her pronounced “computer posture” was resolving and she was able to hold her line.

But this wasn’t the case for the other people I met in the CrossFit world. In fact CrossFit did not seem to change people’s posture that came to it with embedded body patterns, whether that pattern was from sitting at a computer or body building. People got stronger, suppler, but their old pattern was still quite evident. What I realized was that the three data points I had for CrossFit’s benefit to posture—all in my family—had been Rolfed. This inspired me to do a study in which I took seven CrossFit athletes, who had not been Rolfed previously, through the initial three sessions of a Rolfing ten series. (Ironically while I will switch up sessions in my ten series these were in strict recipe type order to more closely mimic “Rolfing”. I wrote up the results of this study in an article for the CrossFit Journal which is awaiting publication.) The results were interesting but inconclusive.

In March 2011 I opened my own CrossFit School, and a number of my Rolfing clients signed on to train with us as they are definitely impressed with the changes they saw in me. I noticed that the clients who had been through the ten series with me were exhibiting a postural change, which was not seen by those who were more of the “first aid” type client. The CrossFit clients who had not been Rolfed did not show a real postural benefit; ease, line. Although they do show greater ROM, strength, etc.

This led me to develop this model to account for what I was seeing.

The two left quadrants of the model represent the typical pre Rolfing client. They have tissue restrictions which we Rolfers are well trained to help them resolve. In the case of clients who are in the lower left quadrant, they are both restricted and do not have the tissue strength (tonus) needed to hold themselves up. They can’t maintain their line, and when faced with the continual demands of life like sitting in front of a computer they adapt to the “computer posture”. They move with the help of Rolfing into the lower right, unrestricted/unsupported quadrant. CrossFit type exercise can help these clients get stronger so they can move up into the unrestricted/supported quadrant.

The clients who are in the upper left quadrant are restricted but strong enough to be able to hold themselves when the restrictions are removed; they move into the unrestricted/supported quadrant. These clients may not see much change from the Rolfing experience with regards to posture, but they will experience a benefit in their work capacity and the freedom of movement that Rolfing provides. These clients are normally already involved in some type of athletic endeavor, weight lifting, or sport that requires the generation of power, however the exercise may not be functional in nature.

The test for whether the exercise workout will cause an adaptive change is summed up by these three questions:

1. Are the movements functional, requiring the use of multiple joints and fascial planes?

2. Are they varied in the movements required, requiring the nervous system to learn?

If the answer to any of these questions is no, then the workout will not cause positive long term adaptation.

We often have people come in to try CrossFit at our school who consider themselves in very good condition: runners, biker’s, even triathletes. They are amazed when we suggest a scaling of the intensity of the workout for them and then grateful that we did. Their difficulty with the workout comes in two physiological areas: absolute strength and amazingly cardio respiratory endurance. As well as an increase in intensity that long slow distance does not prepare them for. But it is exactly this intensity that sets up the need for the body to adapt.

If you’re finding that your clients are not able to win in their battle with long slow time in a sitting position, they may benefit from functional fitness, like CrossFit.